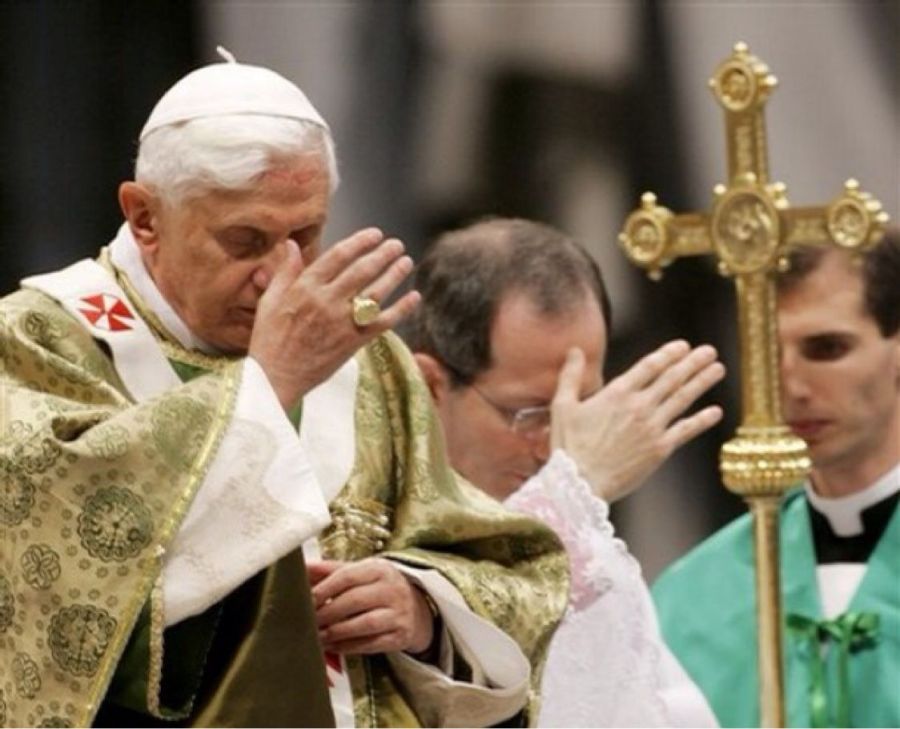 The priest stands at his chair and makes the Sign of the Cross (trace a cross over his body by touching his forehead, breast or belly, opposite shoulder, and then same shoulder), saying “In the name of the Father and of the Son and of the Holy Spirit…”1

[Every priest has the option to use Latin during parts of the Mass. If yours chooses to use Latin, he would say “In nomine Patris, et Fílii, et Spíritus Sancti.”]

All bow their heads, make the same gesture, and say “Amen”.

Why “In the name of the Father and of the Son and of the Holy Spirit”?

By doing this, we explicitly dedicate this time, these actions, and these words to God. That is, we do it in His Name, and Jesus told us that when we gather in His name, He is present.

For where two or three are gathered in my name, there am I in the midst of them.

Jesus Himself gave us this phrase when He taught us how to baptize.

Go therefore and make disciples of all nations, baptizing them in the name of the Father and of the Son and of the Holy Spirit…

Saying this phrase expresses belief in the Trinity – that God is one in Being & Nature, but three in persons. The central tenant in all Christianity is that Jesus revealed God to us as a community of persons, truly distinct from one another, infinitely loving each other, but at the same time only being a single God. We give voice to this belief every time we say these words.

We recognize that salvation was won for us by Jesus’ death on the Cross and that His death on that Cross is the greatest act of love of all time.

Greater love has no man than this, that a man lay down his life for his friends.

This is such an important part of our belief that we regularly trace the sign of the cross on our bodies both in memory of Jesus’ act and in dedication of our time, actions, thoughts, and words to Him.

Why do we bow our heads?

Bowing our heads is a simple form of respect. We recognize that God is due respect, so we bow our heads whenever we hear “Father, Son, and Holy Spirit.” or the name of “Jesus.”

A bow signifies reverence and honor shown to the persons themselves or to the signs that represent them.

Therefore God has highly exalted him and bestowed on him the name which is above every name, that at the name of Jesus every knee should bow, in heaven and on earth and under the earth, and every tongue confess that Jesus Christ is Lord, to the glory of God the Father.

We also recognize God’s great work through particular people and bow our heads whenever we hear their names, too. We do so whenever we reference “Mary” (the Mother of God) and if it is a Mass for a saint’s feast day, we also bow our heads for that saint’s name, too.

A bow of the head is made when the three Divine Persons are named together and at the names of Jesus, of the Blessed Virgin Mary, and of the Saint in whose honor Mass is being celebrated.

The specific Hebrew word amen (’amen ) appears to be derived from a related verb–’aman , which means “he confirmed, supported, or upheld.” This verb is also associated with the Hebrew word for truth (’emet ), which carries the idea of certainty or dependability (i.e., that which is true is that which is certain or dependable).

Amen means “truly; it is so; let it be done.” Whenever we say “Amen,” we are assenting to what is being said and uniting ourselves to the action. There are two very important uses of “Amen” later in the Mass. We will discuss them further as they come up.

Blessed be the LORD, the God of Israel, from everlasting to everlasting!” Then all the people said “Amen!” and praised the LORD.

Fight the temptation to rush through this prayer. Because it is so good at suming up our faith and setting us in the mode of doing our actions in God’s name, we make the Sign of the Cross very often (usually at the beginning and ending of most of our prayers and many other times on its own as a single prayer).

Methodically concentrate on the Cross as the instrument of our salvation (it can help to glance at the crucifix before bowing your head or bring to mind an image Cross). You can also focus on the Father, the Son, and the Holy Spirit as individually distinct Divine Persons, but at the same time the one God (here it can help to bring to mind an image of the Trinity). Don’t worry about trying to comprehend how being one God and three persons works–you never will (it’s beyond full comprehension)–but you can come to know more and more about it–especially by studying what the Church has taught about it:

You can reflect on St. Bernadette. When she saw an apparition of Mary and saw her make the Sign of the Cross, it taught her profound respect for that prayer. Her Sign of the Cross was forever changed. Many people commented that though she was very uneducated, her Sign of the Cross spoke volumes. It was so reverent that it made others believe her.

Here is an article describing that: Lessons from St. Bernadette: Praying the Sign of the Cross. In that article, it references the biography Saint Bernadette Soubirous by Abbe Trochu. I’d like to share a few excerpts from that below:

[From one of the people who had initially come to see Bernadette during an apparition in order to mock her:] “During the ecstasy the child also made the sign of the cross from time to time, and, as I said myself on the way back from the grotto, if the sign of the cross is made in heaven, it can only be made in that manner”

In the presence of the Lady, Bernadette continued her Rosary. When she finished it, she tried three times to lift her fingers, which held the crucifix, to her forehead, but she could not. But on the next attempt she made a beautiful sign of the cross such as I had never seen anyone else make. I asked her later why she had only been able to make the sign of the cross on the third attempt. She answered: “Because it was only then that the Apparition, having finished running the beads through her fingers, had herself made the sign of the cross.”

As a novice at Saint-Gildard, Bernadette gently reprimanded a fellow sister who was hurriedly signing herself upon entering the chapel. Bernadette said, “You make the sign of the cross badly. You must see to that, for it is important to make it well”

[From her Novice Master:] They were edified by her piety and enchanted by the simplicity of their new companion. Her sign of the cross, made slowly, with her hand, carried well out to the tip of each shoulder, “undoubtedly as she had seen the Blessed Virgin make it”, had been a revelation to all of them

Likewise in matters of piety, although she did “what all the others did”, she put into her devotions a sort of supernatural richness such as no one else did. She did not make the sign of the cross more frequently than her companions, but she made it with impressive dignity.”

After making the Sign of the Cross, many Catholics (especially Latino Catholics) form a cross with their fingers and kiss it as a symbol of accepting their crosses in life.

Then Jesus told his disciples, “If any man would come after me, let him deny himself and take up his cross and follow me.