My friend Anthony posted a note on Facebook yesterday, and it quickly garnered a lot of responses. His post was on calling God “good,”and what “good” really means. I decided to add to the growing list of responses:

Good note Anthony. I haven’t been able to read all the comments, but I was wondering if you have considered going further on goodness itself. There has been a lot of use of the word “good” without defining what goodness really is. You were on to something when you noted that being “good” takes discipline. There are many things we would rather do that seem more comfortable, easier, etc., but we know that ultimately they are not good for us. So what makes something good?

Thomas wrote: “The essence of goodness consists in this, that it is in some way desirable. Hence [Aristotle] says: ‘Goodness is what all desire.’ . . . a thing is desirable insofar as it is perfect; for all desire their own perfection. But everything is perfect so far as it is actual [no longer potential] . . . good is attributed to God inasmuch as all desired perfections flow from Him as from the first cause.” [Summa Theologica I-I Q.5-6]

To understand this a little better, let’s start by saying that when we say that “God is Good.” Not only do we affirm that God has a quality of goodness, but that God IS Goodness Itself, and all things that have any goodness to them are only good because they participate in Him [the “first cause” of good]. In what way do they participate in Him? They primarily participate in God on the level of being. They exist only because God is Existence Itself, and He allows other things to exist [to become real, actual]. He also designs all things to have ends–both proximate and final–that is, He designs things to develop over time, to strive for their own perfection (like a rose, striving to be all the rose it can be, from bud, to its peak–even while it withers it is still trying to be that peak rose.) The rose has the proximate end of peak rose. Man has the proximate end of peak man-ness, and the final end of union with God Himself. These ends are the “desires” of which Thomas and Aristotle wrote. Everything not only has an end, but has an inner longing to accomplish that end–to complete that for which it was made.

In this way, what is truly “good” is that for which we were made–union with God. We are good, physically, as we perfect our bodies to achieve our peak physique, power, health, agility, etc. We are not called to a flash-in-the-pan peak (whereby we have one moment at which we have achieved the highest peak and from that point on, we can only look back on the “glory days”); rather, we are called to a continual striving for perfection throughout our lives–we are moved to remain fit even as we grow old. There are other ways of being “good”: intellectually, emotionally, etc., but what is most commonly discussed with regard to goodness is moral goodness. Moral goodness is based on acts that conform or do not conform to that for which we were made–that is, they do not conform to God (Who is Love Itself). That is why the two greatest commandments are to love God and love neighbor. [Matthew 22:37-40]

If any act is to be good, it must be good in every respect–intention, means, end, etc. An act is considered bad insofar as it lacks the full good that the act could have had. We all do bad things–even the righteous man falls 7 times a day [Proverbs 24:16]–but we never do them because they are bad. We do bad things because we see a lower good and prefer attaining that good rather than attaining a higher good. For example, a man doesn’t kill another man just because killing is bad. He might kill another man for self-defense, money, power, reputation, thrill-seeking, calming feelings of rage, etc., but never because it is evil. We only do things we desire. We desire them because there is a good in them. Acting morally consists in being able to accurately see the goods involved in the decisions of one’s life, and acting accordingly. As another example, I might be tempted to cheat on a test because I know it will get me a better grade (and better grades are good insofar as they help us to graduate on time, so that we can get a job and start providing for a family) however, we know that cheating is wrong because it is an offense against both justice and truth. Truth and justice are higher goods than a good test grade, so cheating is wrong, even though the end desired is good.

This is how we get into such murky waters with morality–everyone sees what they are doing as good. They desire something and they go for it. This leads us to try to justify our bad actions–we were trying for the good. Most people are only taught about some specific acts being good or bad, but few are taught why–what makes something good or bad. Knowing this, we can see how easily our society has fallen to the dictatorship of relativism: “What’s bad for you, can be good for me.” This is horribly wrong, and has led many to stray into evil. They just continually justify what they do under the banner of some lower good, refusing to recognize anything higher.

Many wonder, “how can a good God allow evil to happen to good people?” Let’s rephrase this with our new understanding: How can the Source of all Goodness (God), allow His creation to lack perfection? When we look at the question for what it really is, it kind of answers itself, but let’s dive (just a little, because I know this post is already too long). Evil, in this question, can take many forms, but each form has a reason that it is allowed. 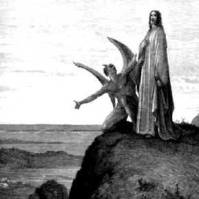 Let’s start with Satan (the first evil). Satan was created as a good angel (Lucifer), but God allowed all the angels to have free will. Lucifer preferred his own way. God, although ABLE to force Lucifer’s allegiance, ALLOWED him to turn away–God honors the free will that He has given to His creatures–He doesn’t force angels or men to follow Him. Angels, because they’re pure spirit (and don’t develop like humans do), don’t change their minds. Lucifer decided against God, and has thus condemned Himself to an eternity away from Love and to trying to thwart God’s creation. Satan and the other fallen angels (1/3 of all the angels) have forever set themselves against God, without the possibility of conversion. God, rather than simply removing Satan’s existence, brings greater good out of the evils that Satan has influenced.

The #1 greater good is the redemption of humanity. Humans act in evil ways, but they are able to convert–because they are continually learning. Adam & Eve were in a state of perfection when they were created, but they fell when they sinned–and with them all of physical creation fell. Men continue to sin today. God sent His Son to die (in the greatest act of love ever) to buy us back from the debt of our sins and raise us up even higher than Adam and Eve were in the garden. We are now able to participate in God’s life more fully than were Adam and Eve–particularly through the grace we receive via our Baptisms, and even more so by receiving Jesus’ Body and Blood in the Eucharist. Jesus gave us those two (and the other 5 sacraments) to apply the fruits of the crucifixion to us, so that we might enjoy an even greater union with Him now and in Heaven.

The last type of evil I have time to address is physical evils (diseases, natural disasters, etc). These are not morally evil. Let me repeat that: physical evils are not morally evil. Just as God allows Satan to exist so that He might create a greater good out of the evils that Satan commits, so God allows physical evils so that a greater good may come forth. First, those afflicted by the evils (directly or indirectly) are able to unite their sufferings to Our Lord’s crucifixion–particularly within the Mass, where the crucifixion is re-offered to the Father every day. Union with our Lord on the cross is a gateway for greater graces. There is a great rush of graces, flowing from the crucifixion, throughout all time, and more are made available when people unite their sufferings to Christ’s offering of Himself on the cross. Ultimately, the greatest good is union with God. Those who unite their sufferings with Him in this life are given graces to remain faithful throughout the rest of their lives and so be in full union with God in the next life. Second, there is also grace available (through such an “offering up” of one’s afflictions) to apply to other people who may be in need of grace. In this way, all of life’s difficulties are able to create greater goods out of the evils suffered. Anyone who has ever suffered anything can offer up that suffering, in union with Jesus’ crucifixion, for graces for themselves and others to be more deeply united to God.

Of course, we can’t see grace, so many people only see the evils in our world and, because of this, many reject God. They are unable to see that God only allows evil so that greater good may come from it. Think back to Anthony’s ideas about being a dad and a coach: he disciplines his kids and his team for their good. He could easily take away the difficulties (he’d have a lot fewer whining complaints), but he wants what is best for his kids and players, so he allows the difficulties for their benefit.

The punishment of Satan, the bad angels, and the humans who go to Hell, is separation from God–absolute lack of union with God, save existence. The eternal separation is a display of God’s justice. The reward of those who unite themselves to God in this life is union with Him forever in the next. This is not a reward that they are due, but rather a display of God’s mercy.

Matthew Kelly is an author/speaker whose catch phrase is “become the best version of yourself.” We grow toward even greater versions of ourselves when we are most tested. When times are easy, we tend to get lazy. That is why we discipline ourselves–we make ourselves go through hardships during the easy times, so that we don’t get lazy. Through discipline, we grow in virtue–good habits. Through virtue, we move closer to God. Our ultimate goal is union with God, the Source of all goodness. Our relationship with God is always in flux. We’re always moving: growing deeper in union with Him, or farther from Him. Each of us has room to grow in many ways and each of us only has so much life left in which we may do that growing. It’s never too late to start and no human is ever too far away from God to change. What would you rather be a display of: God’s justice, or God’s mercy? Strive with everything you have to become the best version of yourself (learn more about God, act based on His design) and God will be merciful.