It appears that Roma locuta est beat me to the post, but I have been wanting to write about why we celebrate Christmas on December 25th . . .

Christmas and the Calendar
Accurate or not, in the calendar, the celebration of Jesus’ birthday comes at a very poignant time of year. We don’t know when Jesus’ birthday actually was, nonetheless the day on which we celebrate the anniversary of His birth is significant for many reasons.

The December Debacle
There are multiple reasons historians propose as to why December 25th was chosen as the date on which we celebrate Christmas. Probably the most commonly heard argument is that the Church “Christianized” a pagan celebration. At that time of the year, the Mithras Cult celebrated the Birth of the Undying Sun. It happens just after the winter solstice, the shortest day of the year (December 21st); beyond that, the days start getting longer again. The ancients obviously weren’t as accurate with their observations of the heavens as our contemporary equipment is, so we can easily forgive them for being 4 days off. The Christians may very well have seen something good in this celebration of the Undying Sun. The sun, which begins to increase (in the Northern Hemisphere) after this time, can be seen as a metaphor for Christ bringing light into the darkness. In addition, the idea of the “undying sun” was a common Christian symbol for Jesus, the “undying Son” (or, rather, He who conquered death). St. John Chrysostom wrote: “Who is indeed so unconquered as Our Lord? If they say that it is the birthday of the Sun, He [Jesus] is the Sun of Justice.” (Of Solstices and the Equinox, 386 AD) The Church is never opposed to finding what is good in other religions, pointing out how that good is a “preparation for the Gospel” (CCC 843), separating it from what is not good, and elevating it to the use of honoring God.

Not only was this idea related to the extra light after the solstice, but also to every sunrise. In early Christianity, the worshippers turned from their Jewish gaze, which was toward the temple. (All synagogues faced where the temple was in Jerusalem and Jews would point themselves toward the temple when they prayed.) The Christians, recognizing that the sacrifice of Jesus on the cross ended the need for the temple sacrifice, re-oriented their prayer direction. They faced east both to greet the metaphor of the rising sun/Son and to look for His return from the east. This is evidently seen in older liturgies where the priest faces the same direction as the people and most older churches are built so that all the worshippers face east.

The difficulty of arguing that Christmas was set on December 25th to Christianize a pagan holiday is that many suggest the motive would have been an attempt to appease the pagan converts who were used to celebrating at this time of the year–as if Christianity would seem more attractive if people were able to still have a celebration at this time of year. Speculation on the attractiveness of merely celebrating a timely festival aside, the more serious challenge to dating Christmas based on the Mithras festival comes when we realize that the Mithras cult was a geographically small group. It wouldn’t make sense to Christianize a holiday of a local group to appease the whole of Christianity’s pagan converts. Perhaps it was an influence on the decision, but I don’t think it was by any means the main reason.

The second reason posited for December 25th is that, on that date in the year 325 AD, the Council of Nicea promulgated the doctrine of the Homouusis–the statement that Jesus, the Son, is consubstantial, “one in being,” with the Father, meaning that He is everything that the Father is, except the Father. The anniversary of this date may have had some influence over setting the date for the celebration of Christmas. Although, if the celebration of Christmas goes back even farther than 325 AD (as some historians believe), then the influence might just as possibly have gone the other way.


Preparing to rejoice in the celebration of the birth of our Lord,
– Casey
On Thursday, our 2nd graders received their First Reconciliation. Beforehand, we invited the families into our parish hall for some last minute preparation. In order to help them better understand Reconciliation, I distributed flyers with the information below and gave an oral presentation on the information. I’ve edited a little bit since then, but this post is pretty much what we gave them:
God wants each of us to be in a good relationship with Him and with other people. When I sin, I hurt those relationships. Every time I do something bad, I offend other people. More importantly, I offend God, whom I should love above everything. Small sins (venial sins) offend those relationships and they hurt my soul. Serious sins (mortal sins) completely separate me from God, break my relationships with others, and seriously damage my soul.

By human power alone, these broken relationships cannot be re-established–we can’t just say we’re sorry to heal the whole relationship; it isn’t sufficient (that’s how great the effect of our sins is). To fix this, God took on human flesh and became a man. He taught, healed people, and forgave people’s sins. Ultimately, He offered His life to cancel the debt of all our sins and to reconcile us to Himself–that’s how much He loves us and wants us to be in a good relationship with Him. 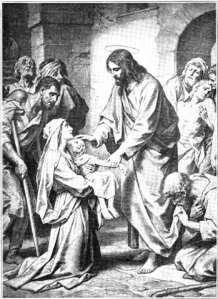 Jesus gave us sacraments to apply His crucifixion to us, so that EVERY person could be forgiven. Baptism forgives Original Sin (the sin we inherit from Adam & Eve) AND it forgives any actual sins we have committed up to that point.

Baptism forgives sins, but someone can only be baptized once–as the creed states, “we believe in ONE baptism.” If someone commits sins after he has been baptized, he cannot be baptized again to be forgiven for those sins.
To forgive sins after Baptism, Jesus gave us the sacrament of Reconciliation. Jesus gave His priests the authority to forgive sins in His name. During confession, Jesus forgives us through His priest. Jesus works through His priests. When we go to Confession, we’re actually confessing to God through the priest.

To restore each of our relationships with Him, God has given us the Sacrament of Reconciliation.
It only takes one good confession to completely wipe away the guilt of my sins and restore me to a perfect relationship with God. No matter how sinful I’ve been, no matter how far away from God I am, no matter how long I’ve been away, it only takes one good confession to be back in proper relationship with Him–that’s how strong the power of the Crucifixion is, and that power is applied to us through the sacraments.

In the prayer that Jesus taught us, we pray “forgive us our trespasses [sins] as we forgive those who trespass [sin] against us.” [Matthew 6:12] An integral part of being forgiven is forgiving other people. If we really want to be forgiven, we need to first forgive the people who have offended us. Forgiveness does not mean we say that their behavior was good; it means that we no longer hold a grudge against the person for having offended us.
Trying to stay in a great relationship with God,
– Casey